Orange County protests against the Minneapolis police killing of George Floyd, a black man, are slated to continue Monday with two separate demonstrations planned in Anaheim, as the novel coronavirus continues to spread.

Editor’s Note: As Orange County’s only nonprofit & nonpartisan newsroom, Voice of OC brings you the best, most comprehensive local Coronavirus news absolutely free. No ads, no paywalls. We need your help. Please, click here to make a tax-deductible donation today to support your local news.

Over the weekend, protestors in Fullerton, Irvine, Huntington Beach, Orange, Santa Ana and San Clemente joined the national outcry over Floyd’s killing and video of a white officer named Derek Chauvin pressing his knee against Floyd’s neck while other officers looked on without intervening.

Chauvin’s knee was on Floyd’s neck for nearly 9 minutes, according to video footage.

Floyd pleaded with officers and said “I can’t breathe.”

Dr. Paul Yost, the outgoing CalOptima board chairman, said he’s concerned the protests and business reopens could bring a spike in virus cases.

“I’m extremely nervous about it,” Yost said. “I see tons of people out without taking precautions, without social distancing and without masks. We know that’s how the virus spreads, but time will tell.”

The virus has now killed 147 people out of 6,474 confirmed cases in Orange County, according to Monday’s updated numbers from the county. There were also 240 people hospitalized, including 97 in intensive care units. So far, 2,632 people have recovered and there have been just over 132,000 tests conducted throughout OC, which is home to roughly 3.2 million people.

“I would urge people to stay the course and be cautious. We know what works against the virus and that’s social measures. We don’t have a vaccine yet,” Yost said.

The virus has a roughly two-week incubation period, so it’s too early to tell how many new cases might stem from protests and business reopenings.

“If they can’t police themselves, how are they going to police us?” Moreno said. “It’s about denouncing state sanctioned police violence that often goes unaccounted for.”

A protest is slated in front of Anaheim City Hall at 5 p.m., according to a digital flyer that reads similar to a Santa Ana protest flyer for last Saturday’s protest, which was largely peaceful until some demonstrators began throwing objects at police, smashing windows and looting a few businesses.

Residents and some City Council members were cleaning up the mess by Sunday morning.

“Fuck the police,” reads the Anaheim City Hall protest flyer, which incorrectly lists the building as a court.

Another protest is slated for La Palma Park at 4 p.m., put on by various teachers who work or live in the city in an effort to give young people a peaceful event at which to protest, Moreno said. The digital flyer for the park protest encourages the Centers for Disease Control and Prevention-recommended six-foot physical distancing to help curb the virus spread.

Shortly after a joint statement from Anaheim Mayor Harry Sidhu and Chief of Police Jorge Cisneros calling for safe protests, a 6 p.m. curfew was issued by City Manager Greg Garcia. 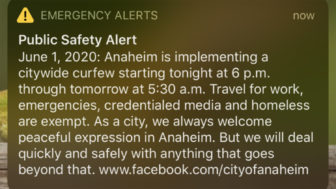 A public safety alert sent to mobile users in Anaheim on June 1, 2020.

“It is out of an abundance of caution to allow people to peacefully express themselves up until 6 p.m. and to keep our community safe after 6 p.m.,” city spokesman Mike Lyster said in a text message.

One Santa Ana officer and an Anaheim police officer were injured in Sunday’s protest in Santa Ana, according to the OC Register.

Meanwhile, businesses around the county were slated to reopen as the protests began.

The South Coast Plaza in Costa Mesa was supposed to reopen Monday after being closed down for over two months due to the coronavirus. The reopening has been delayed following the city’s curfew declaration Sunday, although no protests have happened in the city so far.

Pastor Tecoy Porter, speaking at a Monday news conference in South Sacramento hosted by Gov. Gavin Newsom, said there are two pandemics happening in the country.

The virus is one pandemic, Porter said.

“Then we have this other virus that’s going on that we’re seeing in Minneapolis with what happened to George Floyd and that virus is racism,” the pastor said. “This virus is not just impacting our black community or brown community, but impacting the whole nation.”

“The black community is not responsible for what’s happening in this country right now. We are … our institutions are responsible,” Newsom said. “Let’s just call that out.”

Undelivered promises to fix the inequities and change the institutions have worn people’s patience, Newsom said.

“This is a manifestation of everything we’ve been promoting but haven’t delivered,” Newsom said. “We better start listening, we better start hearing people. We better own up to our own responsibility.”

Spencer Custodio is a Voice of OC staff reporter. You can reach him at scustodio@voiceofoc.org. Follow him on Twitter @SpencerCustodio.

Digital Editor Sonya Quick contributed to this story. You can reach her at squick@voiceofoc.org or on Twitter @sonyanews.

It takes resources to run a successful campaign - anything you can donate will help us spread the word.

We need your help - there are so many ways you can be a part of the campaign.