‘A Voice Of Conscience’: California Pastors Discuss Role Of The Black Church In The Era Of George Floyd

Anyone in the world can log into Facebook, visit Greater Zion Church of Compton’s page and click on its live stream. Depending on the time, you may see a choir erupt in song and praise dancers moving to the sounds of the music. You also might have joined right in time to see Senior Pastor Dr. Michael J. Fisher grace the altar and offer words of prayer during his sermon. All this helps members and everyone watching feel like they’re sitting right in the pews, despite it being a virtual service.

Also making it feel more real: Pastor Fisher’s recent sermons have become more inspired by demonstrations against police brutality and the deaths of Black people at the hands of law enforcement.

“I actually preached about it,” Fisher said of the protests, “even dealing with Moses when God gets his attention through fire in a bush. Sometimes the only way I can get you to pay attention to me is if I set something on fire.”

Church services are more vital than ever for Black communities across the country since the death of George Floyd in Minneapolis. Parishioners have turned to their pastors for guidance during this historic moment.

Take Greater Zion Church: It quickly adapted to stay-at-home orders and has held services addressing the current state of the world.

Pastor Fisher has been supportive of protests after Floyd’s death, which sparked national outcry for justice. These protests became reminders of other incidents involving Black people and law enforcement, such as Breonna Taylor, who officers fatally shot in her Kentucky home.

Pastor Fisher has been far from silent. He believes he’s leading one of the most progressive, young and upcoming ministries. Although Greater Zion Church is the oldest, and first, Black church in Compton, founded by his father in 1954, it has grown and had a shift of leadership over the years. 3,000 families attend, and 70% of the congregation is 35 and younger.

Pastor Fisher, a young pastor himself, acknowledges he has a congregation full of millennials, describing them as “the woke group and the social justice group.”

For the last 15 years, Pastor Fisher has led and participated in several protests himself, including “Push #100,” a movement back in 2015-16 that brought attention to violence against Black people in Watts, South Central Los Angeles and Compton. So when protests sparked over the last several months, it was not a challenge for Pastor Fisher and his congregation to get into the streets and support. 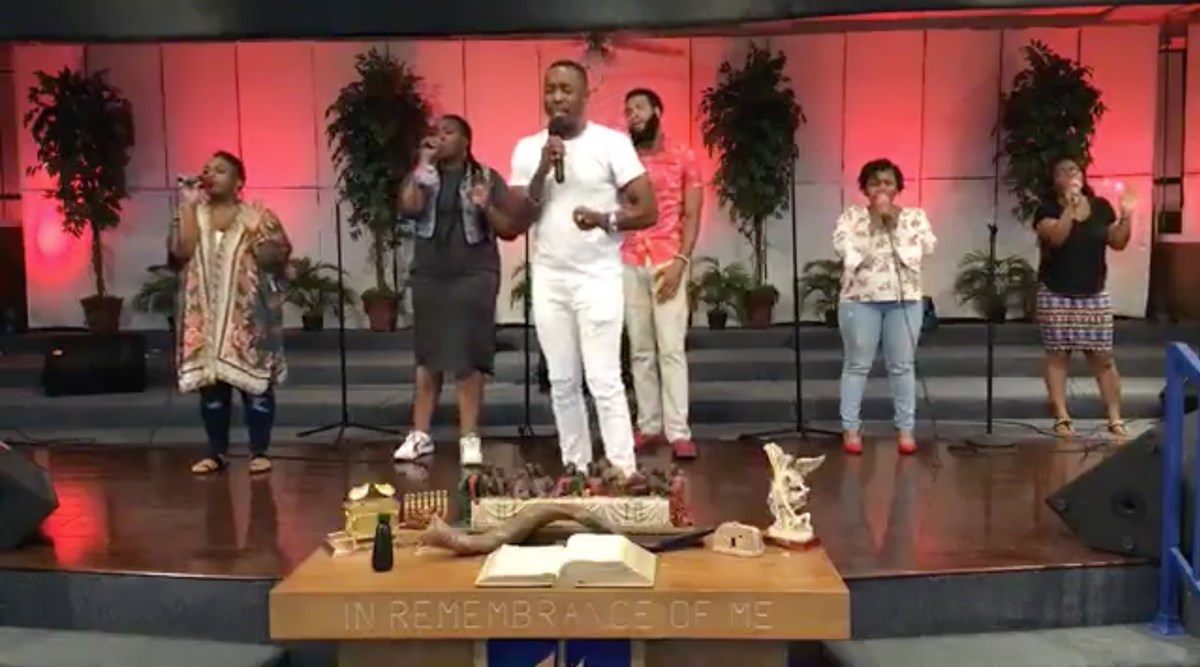 He also has been making calls for change with leaders within the community. And he’s been in conversation with Compton police leadership about reallocating funds for body-worn cameras and creating a council that reviews how the police are patrolling neighborhoods.

And when it comes to defunding the police, he believes the money could be put to improving community services like health and education, rather than having SUVs and stealth, armored vehicles patrolling Black communities through L.A.

Although Pastor Fisher acknowledges wrongdoings by police, he still believes police officers should still exist. And he believes the term “defund the police” is dangerous, a phrase has been heightened throughout protests.

Historically, Black churches have taken the lead on these conversations and cries for justice, since slavery. Policing has also been around just as long and has remained an issue for Black people.

In Sacramento, Pastor Tecoy Porter of Genesis Church spoke of this legacy.

“I understand the history. A lot of people understand the history of policing, the why and how it came about,” Porter said, noting that there were “slave patrols” even after the emancipation proclamation that targeted Black Americans… “They want to protect the white folks from free Black folks. … They got the 13th Amendment in there. That’s the workaround, a loophole, to bring Black folks back into slavery, which leads to our mass incarceration of Black people to this day.”

Pastor Porter is president of the Sacramento chapter of the National Action Network, a civil rights organization founded by Al Sharpton. He is also an active member of the National Association of the Advancement of Colored People and recently partnered with the organization for a George Floyd protest in Sacramento, where he spoke in front of a huge crowd in Cesar Chavez Plaza.

Despite this, he believes police are needed, to an extent, and that it’s a “marathon” to change the system of policing.

Today, he finds himself at the forefront, advocating for his community and supporting his congregation as parishioners step in the middle of these protests and conversations. While he doesn’t completely agree with “defund the police,” either, he believes it is important to think about reallocating funds from law enforcement and putting them to better use throughout the community.

While Pastor Fisher and Pastor Porter support being a part of protests, other pastors like Harold Mayberry of First AME Church of Oakland is not in the streets and cautions his members to be mindful of the pandemic.

Some of his younger congregants and college students have participated in protests across Oakland, though, and he fully supports them, understanding that their advocacy for Black lives is important.

Other ways Pastor Mayberry has been more active is holding weekly calls with the denominations of bishops within the church, who are actively working with civil rights and social justice groups. The church has these weekly “check-in calls” to discuss this movement happening across the country, and to come up with effective ways to lead and support during this time.

Recently, Pastor Mayberry was called to action to sign off on a letter to the city council to readjust the Oakland police budget. Despite his support along with other community members and organizations like the Anti Police-Terror Project, Oakland Mayor Libby Schaaf voted no on further cutting OPD’s budget. 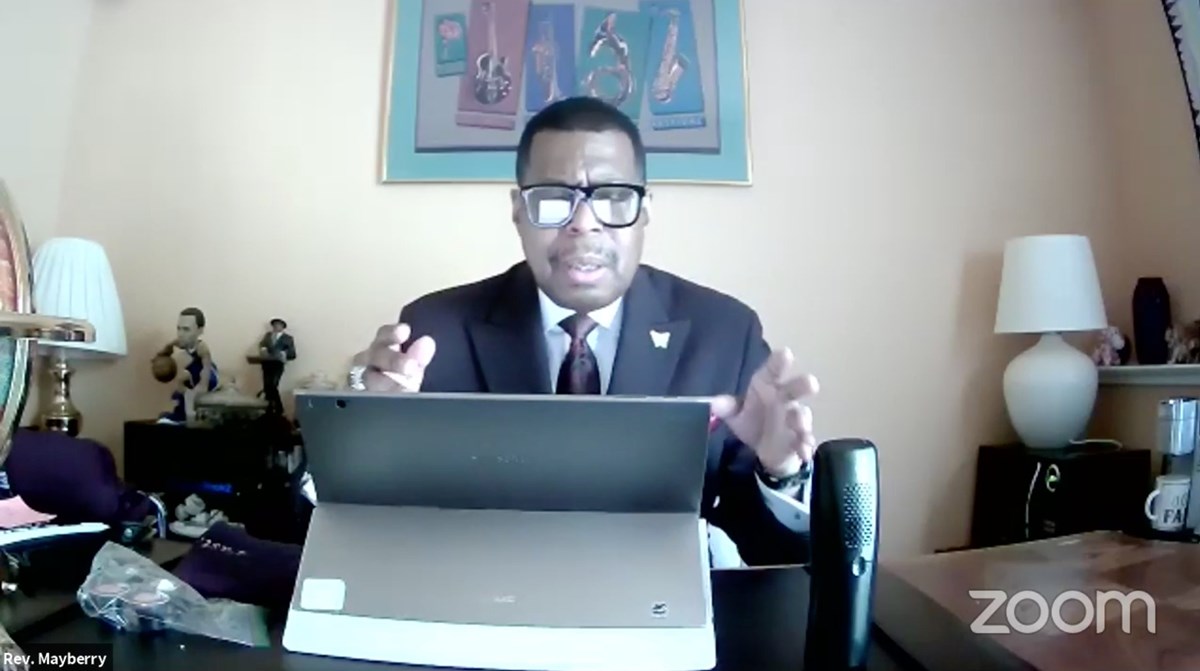 Pastor Mayberry does not use the term “defund the police,” but instead likes to focus on reallocating funds from the police. He believes police are needed to protect people, but some funds should be put directly into the community for better social services.

He says he has noticed a shift in solidarity, with other religious groups reaching out and supporting. The Synagogue of Temple Beth Abraham in Oakland connected with Pastor Mayberry and asked him to write an open letter to their congregation about George Floyd, and why what’s happening right now throughout the country is so important.

“The Black church has been on the front line of change throughout this country, in the early Civil Rights movement days. It was the Black church that offered organization to the people involved in the struggle,” he said. “It’s important that the church is more than just a gathering place on Sunday morning, the church has to be a voice of conscience in the community.”

It takes resources to run a successful campaign - anything you can donate will help us spread the word.

We need your help - there are so many ways you can be a part of the campaign.